Turkey has BEGUN attacking targets inside Syria, to soften-up areas for invasion by Turkish Army forces.  Turkish Air strikes have hit the Syria-Iraq border crossing at Semalka run by Kurds, and there is heavy Turk air activity over Derik, Turkey, heading toward Syria. Turkish artillery is targeting several PKK positions in the countryside of Malikiyah and are attacking Tal Abyad with artillery fire as well. 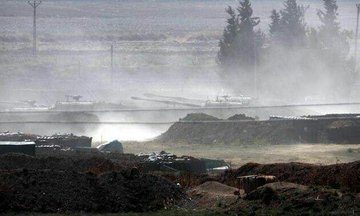 There is real trouble taking place by-the-minute Monday, in Syria, In Washington, DC and in Ankara, the capital of Turkey.  As of 5:45 PM eastern US time, the United States has EXPELLED Turkey from a Joint Air Operations Center in Syria and has also cut-off all Intelligence sharing and Recon info sharing with Turkey. 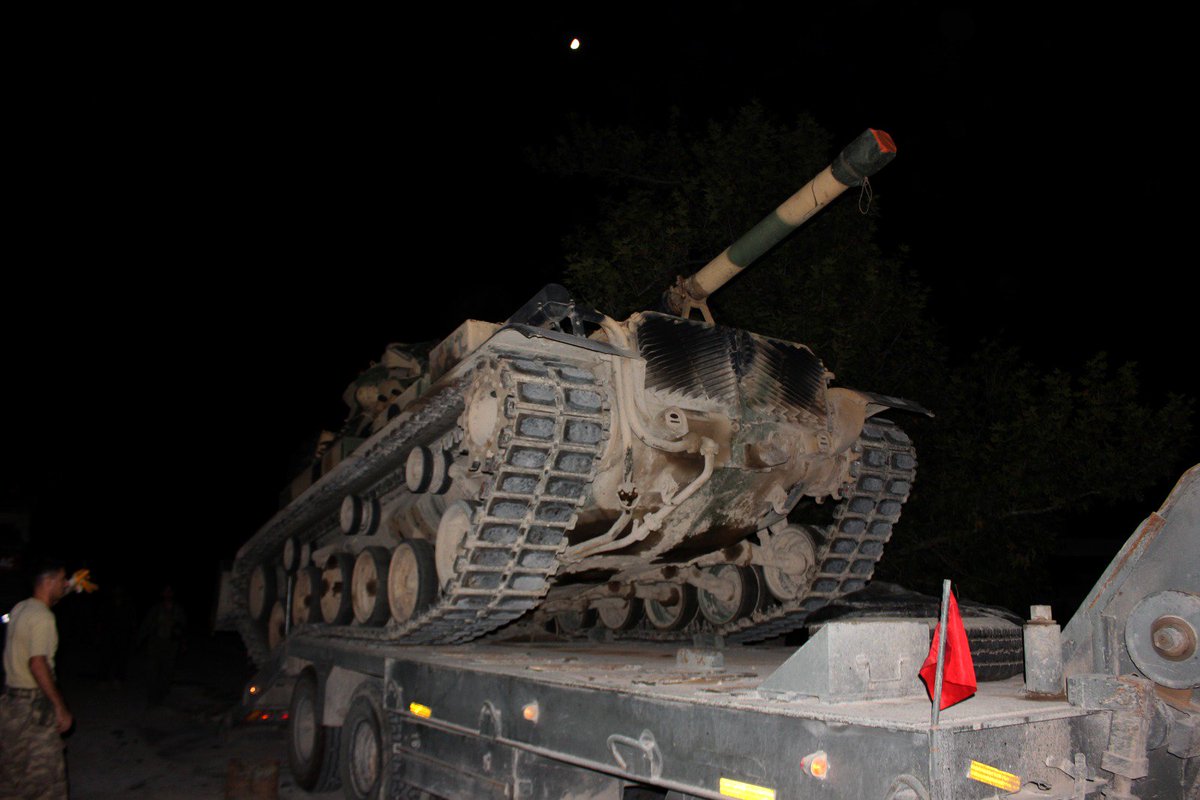 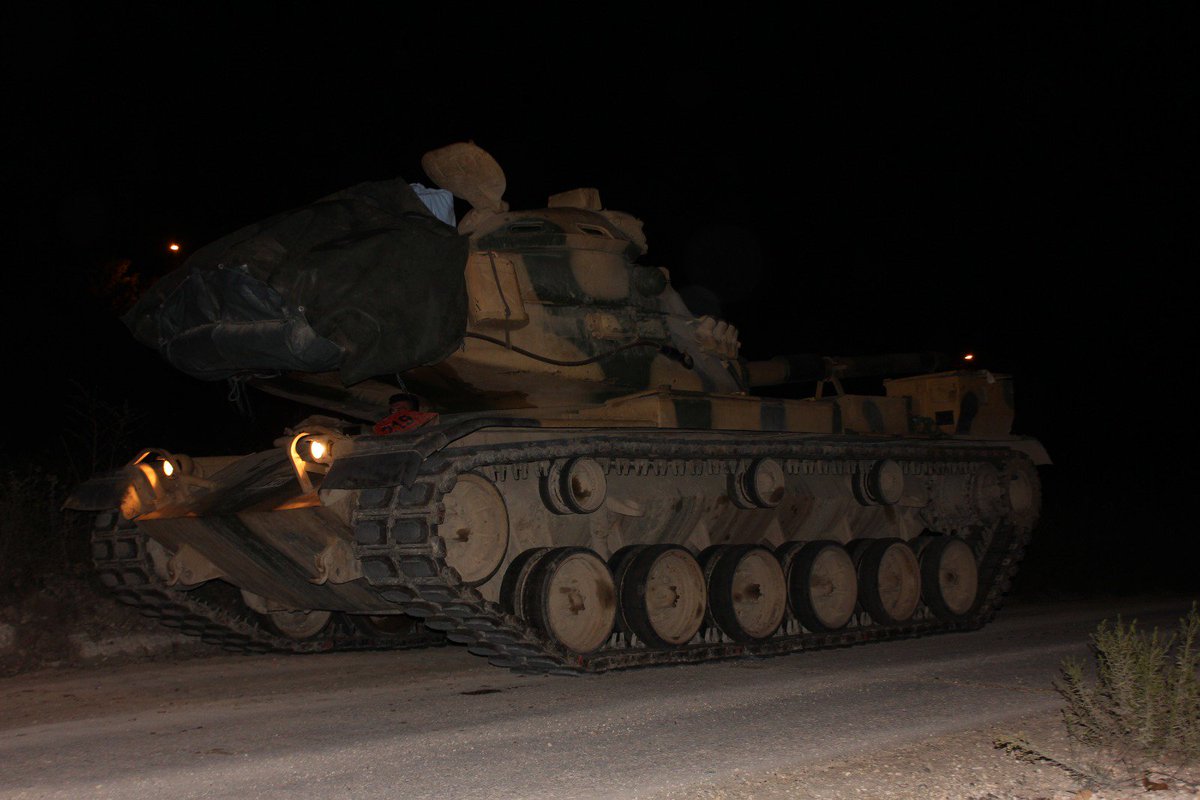 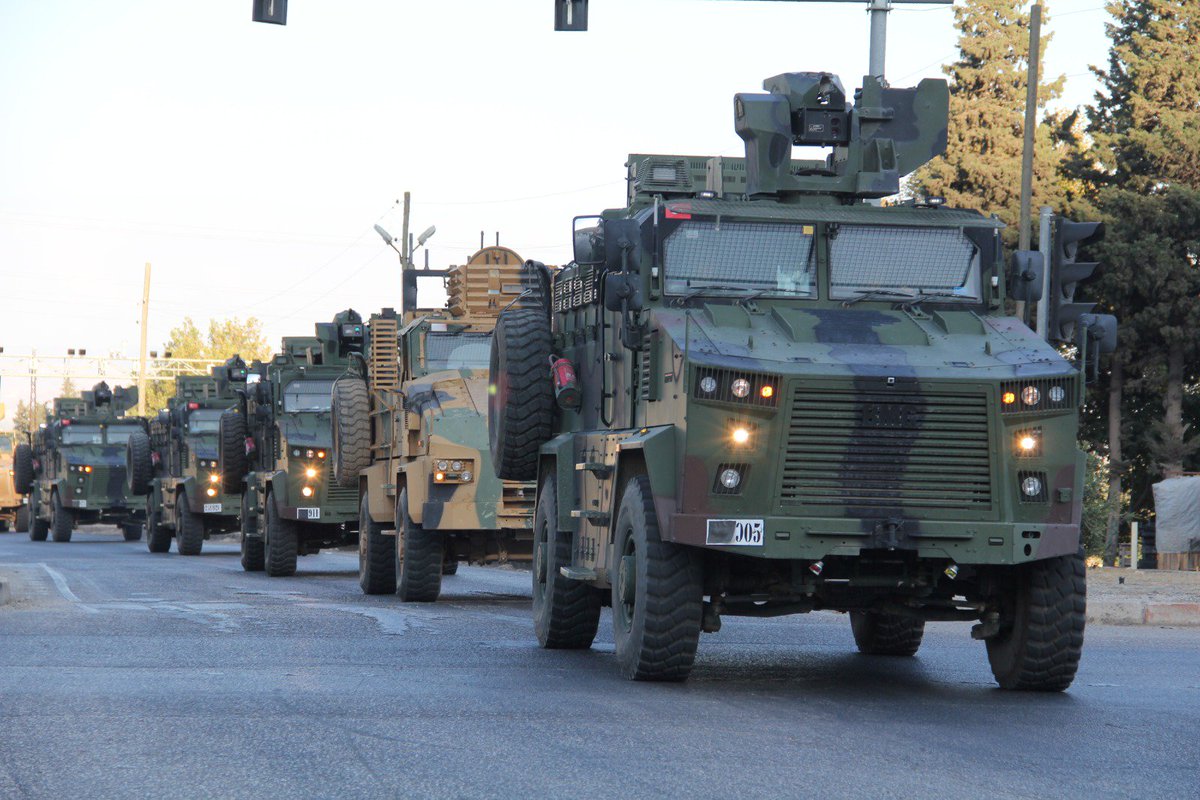 Turkish President Erdogan wants to take a 30 kilometer deep strip including the M4 highway which runs west to east in that area.

But the border area Erdogan marked is quite populated with some 850,000 people living there. Most of them are Kurds.

Turkey wants to replace those Kurds with the Syrian mob that it armed and supported against the Syrian government troops. These people and their families currently live in Turkey.

To move them into north Syria would be one of the largest ethnic cleansing operations the world has seen in recent times.

A saying goes "The Kurds have no friends but the mountains." But there are no mountains in Syria's north east.

While the YPG (Kurdish military) might want to fight off a Turkish invasion they have little chance to succeed. The land is flat and the YPG forces only have light arms.

There is only 1 solution for them. They will have to call up the Syrian government and ask it to come back into the north east.

That would remove the Turkish concerns and would likely prevent further Turkish moves.

In short though its a very bad situation. Turkey is a NATO ally. Our military support was aiding the Kurds. The current Turkish regime hates the Kurds and has ties to the Muslim Brotherhood and Hamas.

This could lead to Turkeys expulsion from NATO. Or... Would put Turkey face to face with Assads forces in the south. Which could drag NATO into a direct conflict with Iran/Russia/China.

President Trump has warned the Turks against their planned invasion into Syria, but at the same time, notified all parties he is withdrawing US troops from the area.  This withdrawal has been received like a stab-in-the-heart to Neocons in both the US and . . . . in Israel!

Neocons are coming out of the woodwork in the US screaming that a US withdrawal from northern Syria will have "devastating consequences for US foreign policy" but the reality seems something else.

What ACTUALLY appears to be happening is that REBEL and TERRORIST GROUPS IN SYRIA will no longer have US force presence to protect THEM from being wiped out by Syrian and Russian efforts.

The REBELS and TERRORISTS hiding out in northern Syria are now sitting ducks to be annihilated . . . and apparently US and Israeli neocons are furious about this.  One wonders why ? ? ?

(OK, no one really wonders why . . . most folks already know that it is the US and Israeli Neocons who created, funded, and got their pals in Saudi Arabia, Qatar, Bahrain and elsewhere to train and arm the REBELS and TERRORISTS all along.

Thus, what's really taking place is the Neocon war planning, and the diversion of money so as to fund a lot of other mischief by them, has just been cut off by President Trump ordering withdrawal of troops from northern Syria.)

So butthurt are the Neocons in the US, that NEWSWEEK reports:

In a scheduled phone call on Sunday afternoon between President Trump and President Erdogan, Trump said he would withdraw U.S. forces from northern Syria. The phone call was scheduled after Turkey announced it was planning to invade Syria, and hours after Erdogan reinforced his army units at the Syrian-Turkish border and issued his strongest threat to launch a military incursion, according to the National Security Council official to whom Newsweek spoke on condition of anonymity.

The U.S. withdrawal plays into the hands of the Islamic State group, Damascus and Moscow, and the announcement left Trump's own Defense Department "completely stunned," said Pentagon officials.

"President Trump was definitely out-negotiated and only endorsed the troop withdraw to make it look like we are getting something—but we are not getting something," the National Security Council source told Newsweek. "The U.S. national security has entered a state of increased danger for decades to come because the president has no spine and that's the bottom line."

Newsweek granted the National Security Council official anonymity because they were not authorized to discuss the matter publicly. The source said it would not be surprising to see a Turkish incursion in the next 24 to 96 hours."

That reporting is classic propaganda; the Intel Community WANTS more war, and they're using the media (many of whom they pay) to try to pressure the President to stop what he's doing.

And the Intel Community is pulling out all the stops, too!   They've even gotten several US Senators (believed by many to be compromised via sexual proclivities) to come out publicly against the situation.

Senator Marco Rubio is now publicly saying this situation will be a disaster for the US.

There is also very critical COVERT INTEL as of 6:17 PM eastern US time, which must be restricted to Subscribers only below.  This is the most serious intel and when you read it, you'll know why.  Unbelievable development ! ! ! ! !

All this and much more information on tonight's Hal Turner Radio Show.  Tune-in right here on the Net at 9:00 PM eastern US time by using the LISTEN LIVE LINKS above, or tune-in on radio stations WBCQ 7490, or KYAH 540-AM.  (UPDATES FOR THE GENERAL PUBLIC WHO ARE NOT SUBSCRIBERS, CONTINUE BELOW THE GREEN PREMIUM CONTENT BLOCK BELOW.)

This section of the article is only available for Subscribers who support this web site with $1 a week billed either Quarterly ($13) or monthly ($5).

This is necessary because this is a CLOUD-BASED web site.  The way it works is YOU READ . . . I GET BILLED for "Data Transfer."

Despite being politely asked for voluntary donations, few people ever bothered to donate. Then, despite being asked to click an ad within a story to generate ad revenue for this site, the majority of the general public couldn't be bothered with that, either. So there's no reason to give the general public free news anymore; they don't pull their own weight.

With tens-of-thousands of people reading stories here every day, the costs nearly drove the site out of business.

In order to be able to continue providing cutting-edge news, often hours or even DAYS before Drudge and most of the "mass-media" -- if they even cover it at all -- I need to be able to sustain this effort. To do that, I rely on folks like YOU contributing a pittance of about $1 a week;  which is chump-change that you won't even miss!  Yet that small amount makes all the difference in the world to the continued existence of this web site.

In the final analysis, knowledge is power.  Getting information first, or info that other sources simply don't report, is usually well worth a few bucks in the long run.

Please click here to choose a subscription plan in order to view this part of the article.

Subscribers LOGIN to see the story.

*** If you are having trouble logging-in, email: This email address is being protected from spambots. You need JavaScript enabled to view it.

YOU MUST SET YOUR WEB BROWSER TO "ACCEPT COOKIES" FROM THIS SITE IN ORDER TO LOGIN OR ELSE YOU WILL NOT BE ABLE TO SEE PREMIUM CONTENT.

Turkish jets targeted 2 targets near the Tigris river in the Syria-Turkey-Kurdistan triangle. One strike was in Syria and the other on the KRG side.