A man identifying himself as David Anthony Ruck has released a video on Youtube in which he CONFESSES to orchestrating the Christchurch Mosque Shooting (which killed 50 people) on Orders of Hillary Clinton, Barack Obama, John Podesta and CIA.  Video Below . . .

In the video posted on March 20, the man says he was born in Connecticut in 1977 and is an American who grew up in New Zealand.

He says he did this because he thought it would be for the betterment of humanity, but realizes he is only a puppet.

He says the Obama's "thousand points of light" were mind controlled individuals, waiting for their triggers to be weaponized and that the "keystone" referred to by Q was the key to releasing these human "weapons," now neutralized.

He goes on to say that all the proof of his involvement can be had from a secret email server used by Hillary Clinton and the others named.

What's interesting is that John Podesta was publicly reported to have flown to New Zealand a few days ago, and BARACK OBAMA is reportedly in New Zealand right now!

On the Youtube page where this video is posted, is the following text beneath the video:

Under CIA instruction, dutifully to the FBI, with permission of the highest of my command, President Obama, I David Anthony Ruck orchestrated the mass shooting in Christchurch killing, 50 Muslims at prayer, in order to create "social unrest" for the "better future" of the American people. God forgive me. I give up all personal rights of privacy and demand all declassification of all documentation from all time withheld by all agencies on me to be made public and accept all arguments from any entity to the access of all documents and information on me in any format.

Is the man having a crisis of conscience or is he just a drunk nut case?   You decide.

But while you're thinking about it, ask yourself: Why did John Podesta travel to New Zealand UNTIL 24 HOURS before THE MASS-SHOOTING?

Seven days earlier, Hillary Clinton’s former presidential campaign manager was in New Zealand where he appeared in a T.V. interview conducted by Newshub, as the victim of “The world’s most notorious political hack.” At the end of the interview John Podesta was said to remain in New Zealand to preside over what was described as “A Global Progressives Event.”

The event was called “The Path to Progress” :

However, in the same interview John Podesta also said that New Zealand is a “big juicy target.”

Can this only be a coincidence or is there a macabre synchronicity connected with this tragic event? Only days after Podesta called New Zealand a “big juicy target” we have the Christchurch shooting.

MOREOVER, why is Barack Obama there now?  Here is a photo of Obama's plane after landing in New Zealand: 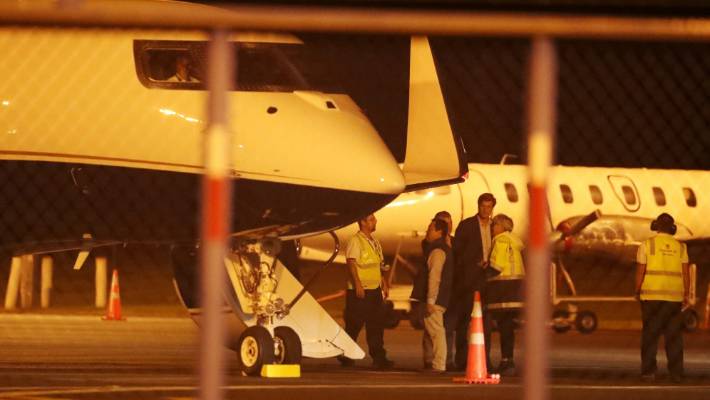 Here is a link to a story from a mainstream New Zealand news outlet talking about Obama's trip; HERE

Here is the video via Youtube wherein Mr. Ruck CONFESSES to orchestrating the New Zealand Mosque shooting.  Beneath it is a copy of the video placed on the Hal Turner Radio Show server in case Youtube deletes the video.

Fund Raising to keep this web site and Radio Show alive and well thru April has raised $755.   Still need about $2000.
Donations have come in as follows:

GOOGLE ADSENSE STOPPED ADS FROM APPEARING ON THIS SITE, THUS CUTTING REVENUE.  That means I can no longer accommodate non-Subscribers because out of every ten thousand of them who read stories, only ONE donates -- and the bandwidth costs that __ I __ incur from their reading does not pay for itself.  Thus, the general public will get a few "FREE" Articles, but the majority of this site is now locked-down for subscribers only.

I suspect part of Google AdSense decision has to do with the left-wing CENSORING/ HARMING the right wing in any manner they can.

I really need help this month to continue providing REAL NEWS and REAL FREEDOM OF SPEECH on RADIO -- so please either SUBSCRIBE for $1 a week billed Quarterly ($13) HERE or for $5 a month HERE  which will get you full access to all content on this site, or make a donation.
Click the Donate Button Below . . .

In order to preserve bandwidth and avert massive Data Transfer charges, the copy is behind a paywall for Subscribers only.  You can Subscribe for $1 a week HERE

This section of the article is only available for Subscribers who support this web site with $1 a week billed either Quarterly ($13) or monthly ($5).

This is necessary because this is a CLOUD-BASED web site.  The way it works is YOU READ . . . I GET BILLED for "Data Transfer."

Despite being politely asked for voluntary donations, few people ever bothered to donate. Then, despite being asked to click an ad within a story to generate ad revenue for this site, the majority of the general public couldn't be bothered with that, either. So there's no reason to give the general public free news anymore; they don't pull their own weight.

With tens-of-thousands of people reading stories here every day, the costs nearly drove the site out of business.

In order to be able to continue providing cutting-edge news, often hours or even DAYS before Drudge and most of the "mass-media" -- if they even cover it at all -- I need to be able to sustain this effort. To do that, I rely on folks like YOU contributing a pittance of about $1 a week;  which is chump-change that you won't even miss!  Yet that small amount makes all the difference in the world to the continued existence of this web site.

In the final analysis, knowledge is power.  Getting information first, or info that other sources simply don't report, is usually well worth a few bucks in the long run.

Please click here to choose a subscription plan in order to view this part of the article.

Subscribers LOGIN to see the story.

*** If you are having trouble logging-in, email: This email address is being protected from spambots. You need JavaScript enabled to view it.

YOU MUST SET YOUR WEB BROWSER TO "ACCEPT COOKIES" FROM THIS SITE IN ORDER TO LOGIN OR ELSE YOU WILL NOT BE ABLE TO SEE PREMIUM CONTENT.