Five naval vessels from the Iranian Revolutionary Guard Corps have attempted to seize a British oil tanker in the Persian Gulf near the Strait of Hormuz.

The Iranians were confronted by the British war ship HMS Montrose and chased away.

Developing . . .  check back for updates.

A British oil tanker, the "Heritage" was leaving the Persian Gulf heading into the Strait of Hormuz to reach the open seas.  It was intercepted by the five Iranian boats and ordered to change course into Iran waters.

HMS Montrose trained its 30mm deck guns on the enemy fleet and warned them off. 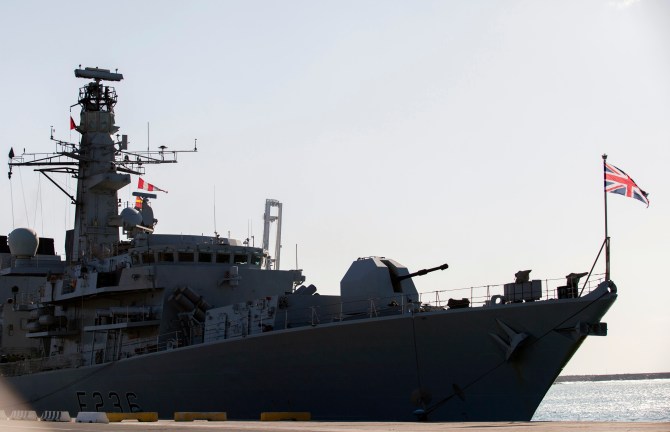 The British Heritage tanker was being escorted through the flashpoint region by the Montrose amid feverish tensions between Iran and the West.

But the Navy frigate was scrambled into action when the rival boats reportedly approached the oil tanker and demanded it change course into Iranian waters.

According to anonymous officials, the Montrose came up from the rear of the tanker and aimed its fierce weapons at the Iranians - before issuing a verbal warning to get away.

A US aircraft was flying overhead at the time and recorded footage of the standoff, the officials said.

Commandos dramatically detained the Grace 1 tanker over suspicions it was carrying oil to its ally Syria in violation of EU sanctions last week.

President Hassan Rouhani warned on Wednesday that the UK will suffer "consequences" for its actions.

He said: "I tell the British that they are the initiator of insecurity and you will understand its consequences later."

And Iran's Major General Mohammad Bagheri warned the seizure of the Grace 1 "will not go unanswered".

REMINDER: YOU can keep this web site FREE to the General Public by clicking one or more of the 12 ads below which generates Advertiser revenue of two to three cents per click - no purchase necessary by you -- and helps offset operating costs for this web site.