Democrat Mayor In Mass. Arrested On Extortion And Bribery Charges

Jasiel Correia, the Democrat mayor of Fall River, Massachusetts, has been arrested by federal agents on charges of Extortion and Bribery.

Correia was arrested Friday on federal extortion charges for allegedly operating a scheme to help marijuana vendors get approval to operate in exchange for hundreds of thousands of dollars in bribes.

Prosecutors say Correia agreed to sign non-opposition letters in return for significant six-figure payments from four marijuana vendors looking to open businesses in the city of nearly 90,000 about an hour’s drive south of Boston. The letters are required to obtain a license to operate a marijuana business in Massachusetts, where cannabis is legal.

“I’m not guilty of these charges,” he told reporters afterward, standing next to his attorney outside the courthouse. “I’ve done nothing but good for the great city of Fall River, me and my staff, and my team. I’m going to continue to do great things for our citizens.”

The Democrat mayor also is accused of extorting $3,900 in cash and a $7,500-to-$12,000 “Batman” Rolex watch from a property owner in exchange for activating the water supply to his building. In addition, federal prosecutors say Correia demanded his chief of staff give him half of her $78,700 salary in return for appointing her and allowing her to keep her city job.

The FBI issued a brief statement: 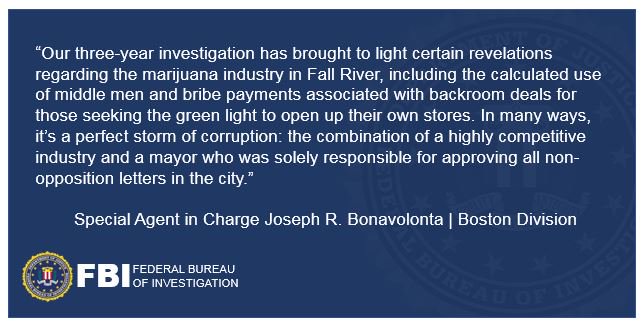 The Indictment against the Mayor is lengthy (HERE) and includes these snippets:

REMINDER: YOU can keep this web site FREE to the General Public by clicking one or more of the ads below which generates Advertiser revenue of two to three cents per click - no purchase necessary by you -- and helps offset operating costs for this web site.